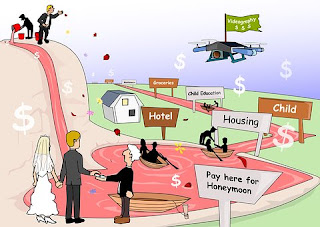 If you want to truly create wealth, its critical that you believe that you are completely in control of every aspect of your life; especially in your financial life.

Remember, you are where you are financially because of decisions you've made; not someone else. It's the government, it's my boss, I don't have the education, etc. etc. but, in reality its your fault.

This is hard for people to accept but its true.

To get your FREE book: The Science Of Getting Rich Click Here

My father came from a very poor share-cropping family who rented the land they lived on. Living in a poor area of southern Colorado, they lived through the Great Depression with 14 children in a cramped wooden cabin.

This caused a strong scarcity in all the children. Since they literally didn't have very much then by extension, the world was a cold, cruel place; everyone & every place became the enemy.

Growing up, my father worked a lot of hours; money was 'scarce' but we had a good life. However; we weren't taught to focus on opportunities, entrepreneurialism wasn't taught; you go to school, get a good education & then go to work for the Man.

In high school I worked at an exclusive country club where I saw millionaires first hand. I had a front row seat to see how millionaires thought & acted.

Ironically, literally a 5 minute drive from this exclusive, millionaire country club was a small community of shanty houses built out of corrugated tin & we all attended the same high school. I saw kids who came from generational poverty & generational wealth but, why do both sides continue to be either rich or poor? Their mind set.

Have you ever noticed that most of the people who buy lottery tickets are typically poor? Why is that? They literally believe that their wealth will come from someone else picking their winning number & 'make' them a millionaire. They are placing their future in the hands of someone else who neither cares about them nor about their future.

The kids from the shanty town were stuck in a mental state of poverty; their parents were poor, their grandparents were poor & they too believed that they would also be poor. They were often angry & resentful towards the kids whose families were rich.

The rich kids families had always been rich, & they too believed they would be rich like their parents. They 'knew' that they would get into a prestigious school, get a well paying job & move forward in life &, most of them did.


Why? They possessed the millionaire mind set.

Poor people choose to play the role of the victim rather than directly assuming full responsibility for what's going on in their lives. Ever been around someone who was poor & constantly complaining? Its physically & mentally draining.

Having this 'victim' mentality dominates their thoughts, 'poor me,' 'I can't catch a break,' 'we're not meant to have money,' 'rich people are stingy with their money, why don't they share it with me?' And on & on.

This a role, plane & simple it's a role they are playing; no one is a victim unless you choose to be one.


WEALTH PRINCIPLE: There is no such thing as a really rich victim!


Victimhood gives immediate rewards to the person who is playing the role of victim; they get immediate attention but, no financial rewards. Having others pay attention to you is important to our mental health, rich or poor we all love to be noticed but, people twist attention & use their victim status to reap short term, non-financial rewards which eventually fade.

As T. Harv Eker stated, there's not such thing as a rich victim. In order to stay a victim you have to choose to remain so, victims never become rich.
You need to make a decision, right now.

Are you a victim of circumstance? Are you poor because of your skin color, race, religion, social class, because you're too short, too tall, too fat or too thin? These excuses are exactly that, excuses.

You can be like most of my extended family, a poor victim of circumstance or you can choose to take charge of your life & deliberately choose to be 100% responsible.

DECLARATION: Say out loud...."I create the exact level of my financial success; I have a millionaire mind!"
MILLIONAIRE MIND SET ACTION PLAN

1. Stop Complaining: Each time you find yourself blaming, justifying or complaining, Eker suggests you slide your index finger across your neck as a trigger to remind yourself that you are slitting your financial throat. Though this may seem extreme, it is a very visceral metaphor for what you're creating first mentally & then in the physical world.

Then answer the following question about each situation:
"How did I create each situation?" If others were involved, then ask, ""What was my part in creating these situations?"

Finally, finish up by taking the negative situations & re-writing them as happening in the most idealistic way then that night, as you lay in bed re-live the situation again from this ideal point of view; the situation will change.

To get your FREE book: The Science Of Getting Rich Click Here